We in the Jewellery Quarter are always happy to welcome new additions, especially when those additions come in the form of food! The Rebel Chicken is a brand new rotisserie chicken restaurant and cocktail bar, and let us start off by saying how amazing it is.

Some of you may have already heard about The Rebel through their impressive social media campaign, however, you may have seen it under another name, Fowl Play. We’re not going to go into the name change too much, but we personally prefer the name The Rebel Chicken, especially with the lightning bolt through their logo, I think it may have something to do with our love for David Bowie, but then again who knows… 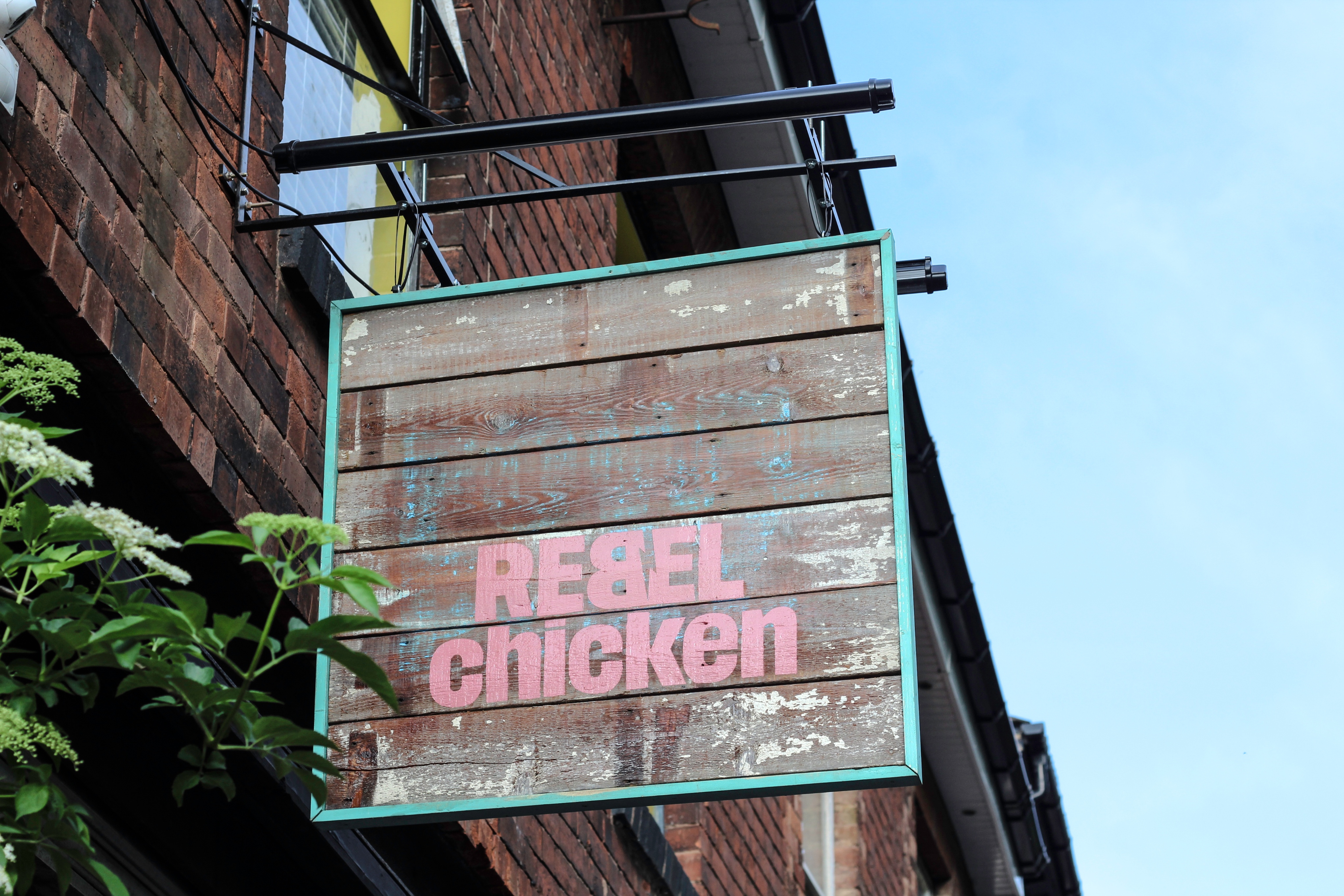 From the moment you walk in, you can tell this place is something special. Hidden behind Pittsford Street, the only way in is through an alley decorated with their own posters and some charming lights which opens up to an impressively sized beer garden. 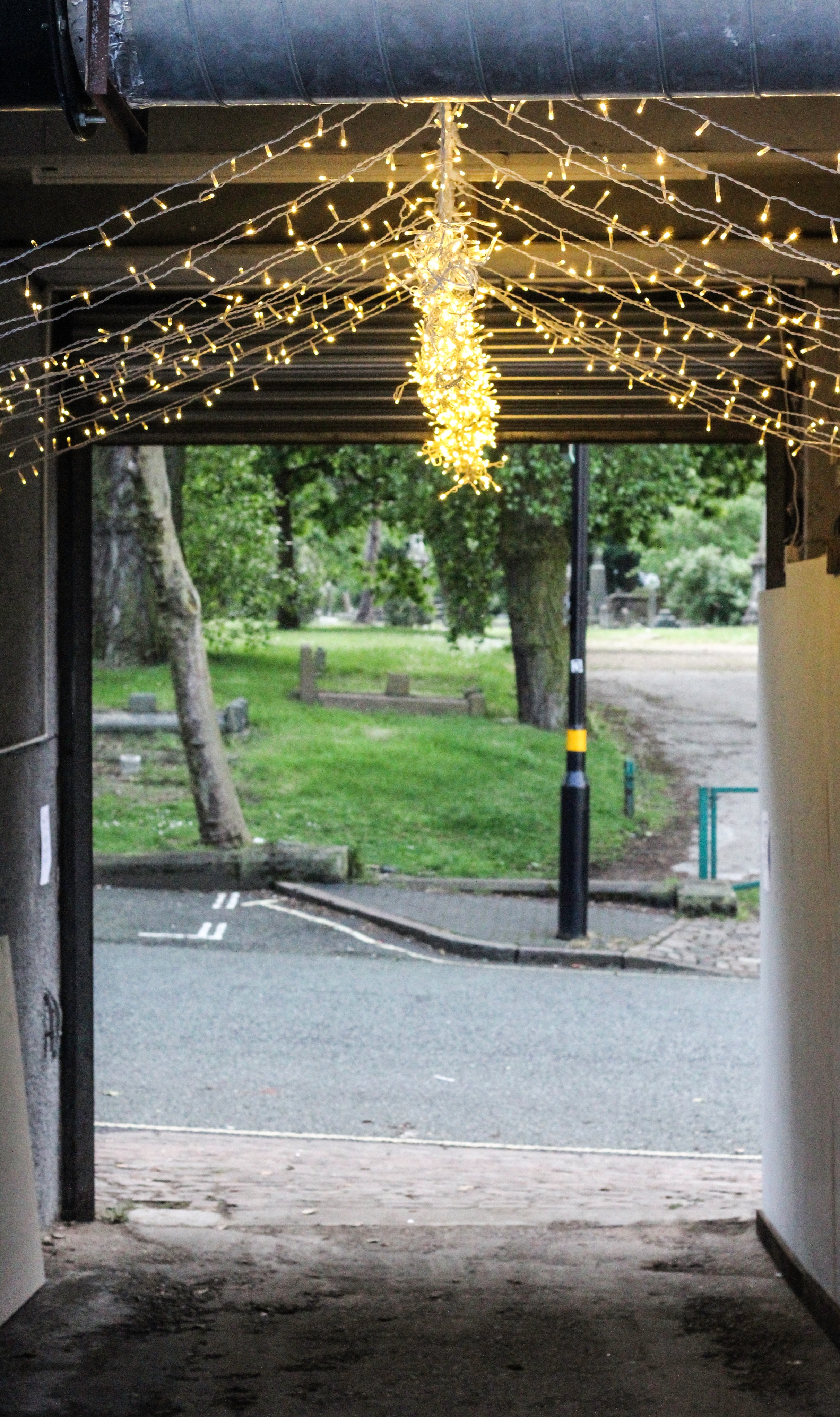 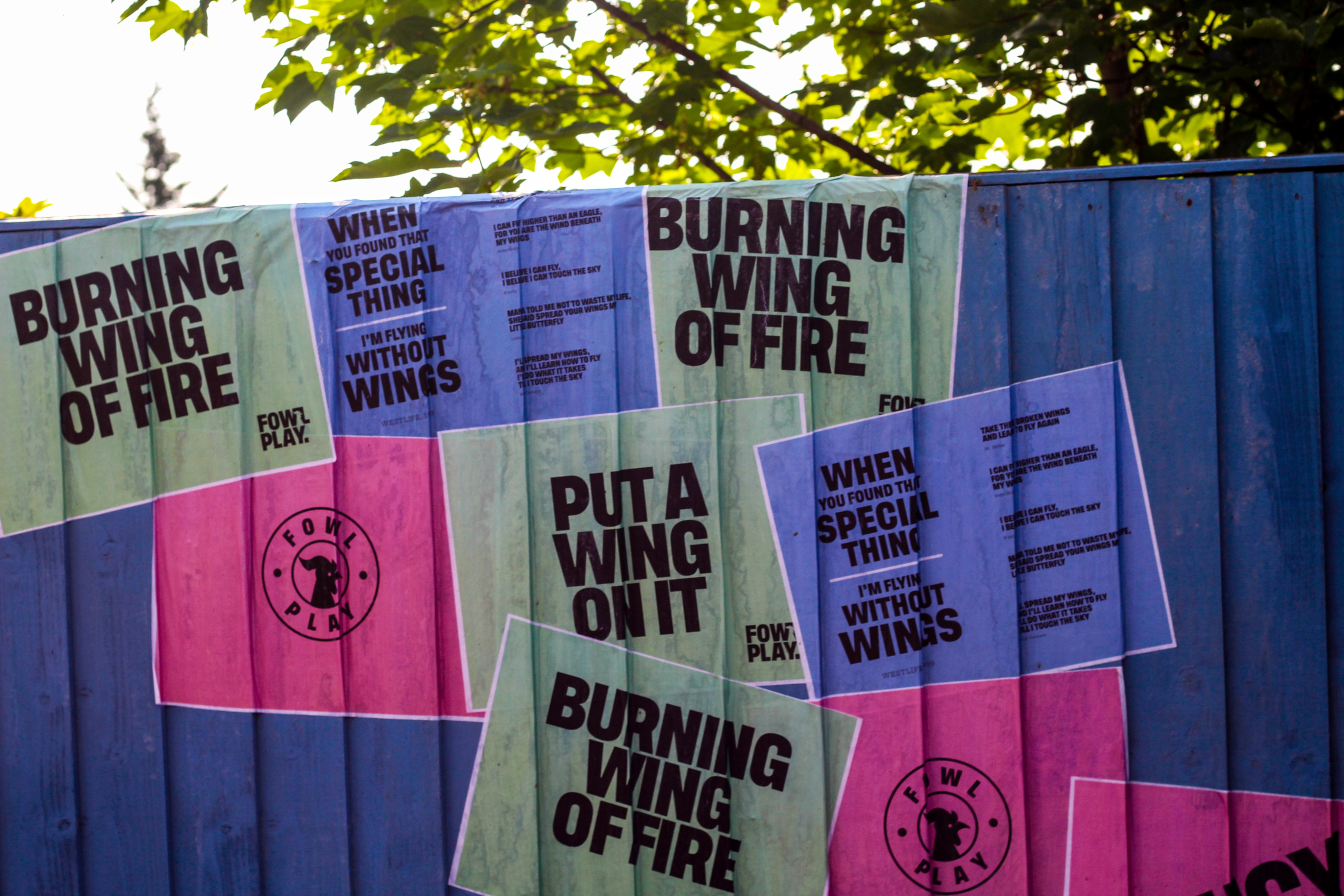 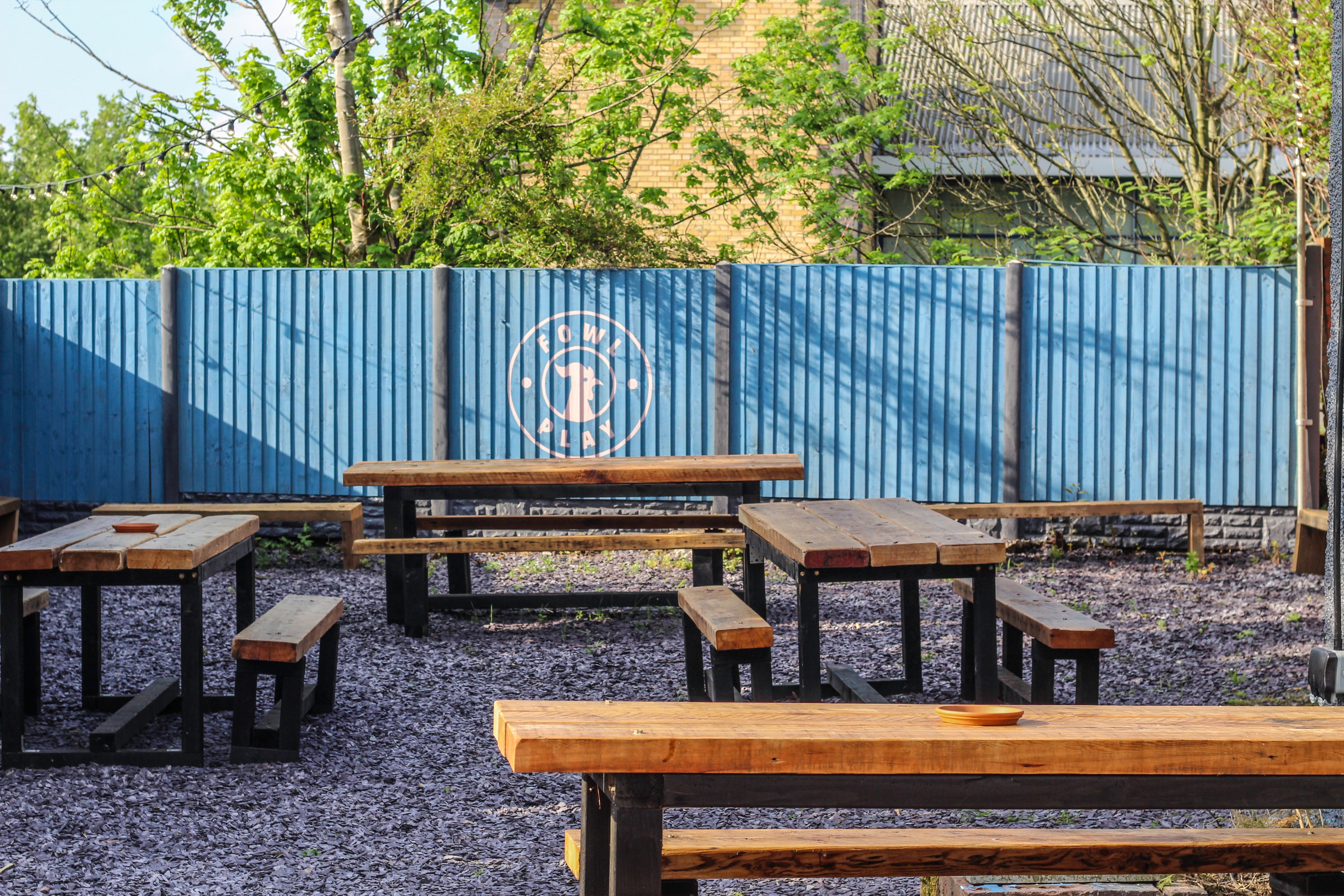 After pulling ourselves away from the food (which instantly smelt out of this world) we had a little wander around. From seeing how the place is kitted out, you can tell The Rebel Chicken had a very clear plan on how they wanted the place to be. With open brick walls, rustic leather chairs and a bar made to match the beer garden, The Rebel is one of the most stylish chicken places we’ve seen, you definitely won’t feel couped up. 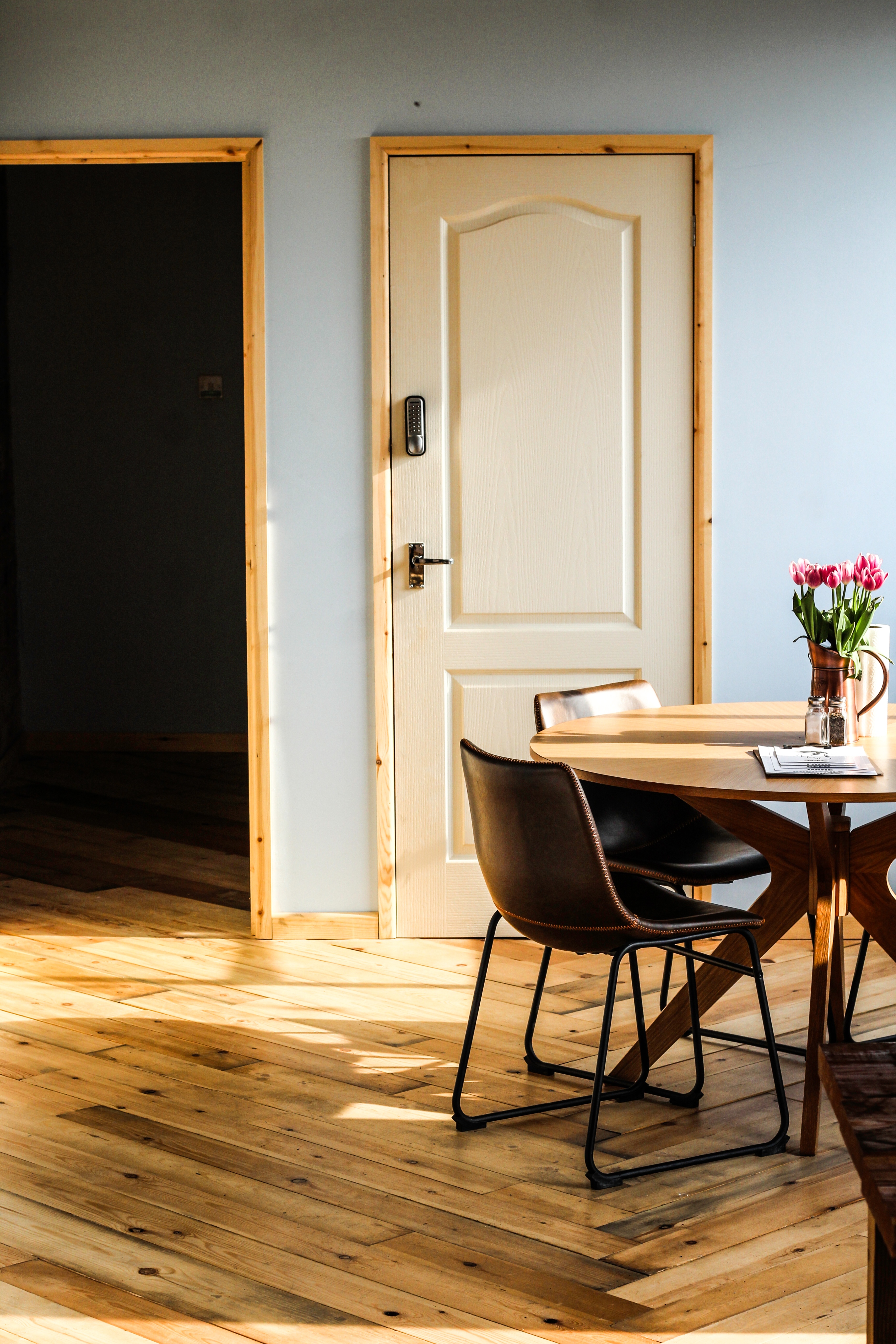 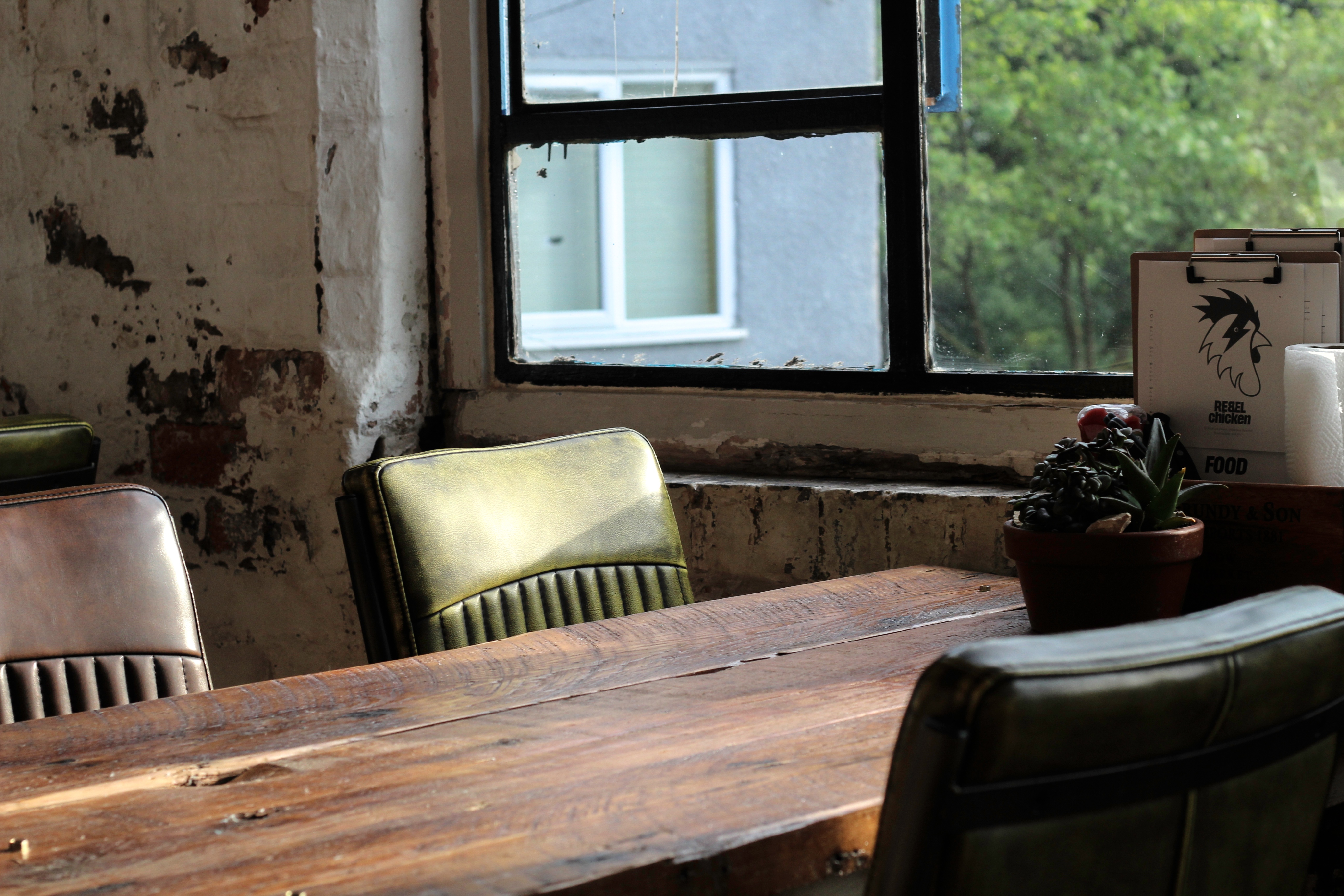 We were told briefly how it’s prepared, they steam it, then marinate it and cook it on their own charcoal rotisserie. There is so much effort in every small detail, for example, their coal is imported from Cuba and their wood is Sweet Cherry. We were treated to platters of all the different dishes, including wings, breasts, thighs and what we considered to be the ultimate Caesar salad; we couldn’t get over the portion size! One of our personal favourites were the BBQ chicken wings, they had the perfect blend of smokey and sweet flavours and they weren’t too messy to eat, bonus! We do regret to inform you that, unfortunately, we did not try the hot wings, we weren’t ready for the spice. In other words, we bottled it.

Some of the sides we tried were corn on the cob, fries (both normal and sweet potato), homemade salad and an array of sauces. The corn was crisped slightly on the outside and delightfully juicy and tender as you bit in; unsurprisingly, it went really well with the chicken gravy that accompanied it. The fresh coleslaw was delightful, even if you are not usually a fan of fresh coleslaw, we recommend trying The Rebel’s. It wasn’t too creamy and it had an amazing crunch to it which meant it paired perfectly with the mass amounts of chicken breast we were given. Some might say we had too much…they would be correct. Just when we thought it was all over, the game changed as we saw dessert was about to be served. So, we powered on and made room. We must admit, part of us were hoping dessert would be a chocolate glazed chicken. It wasn’t. Instead, we were offered the most amazing looking cheesecake, waffles, and salted caramel cake. We managed to try the cheesecake and waffles before we had to tap out. It was so worth it. 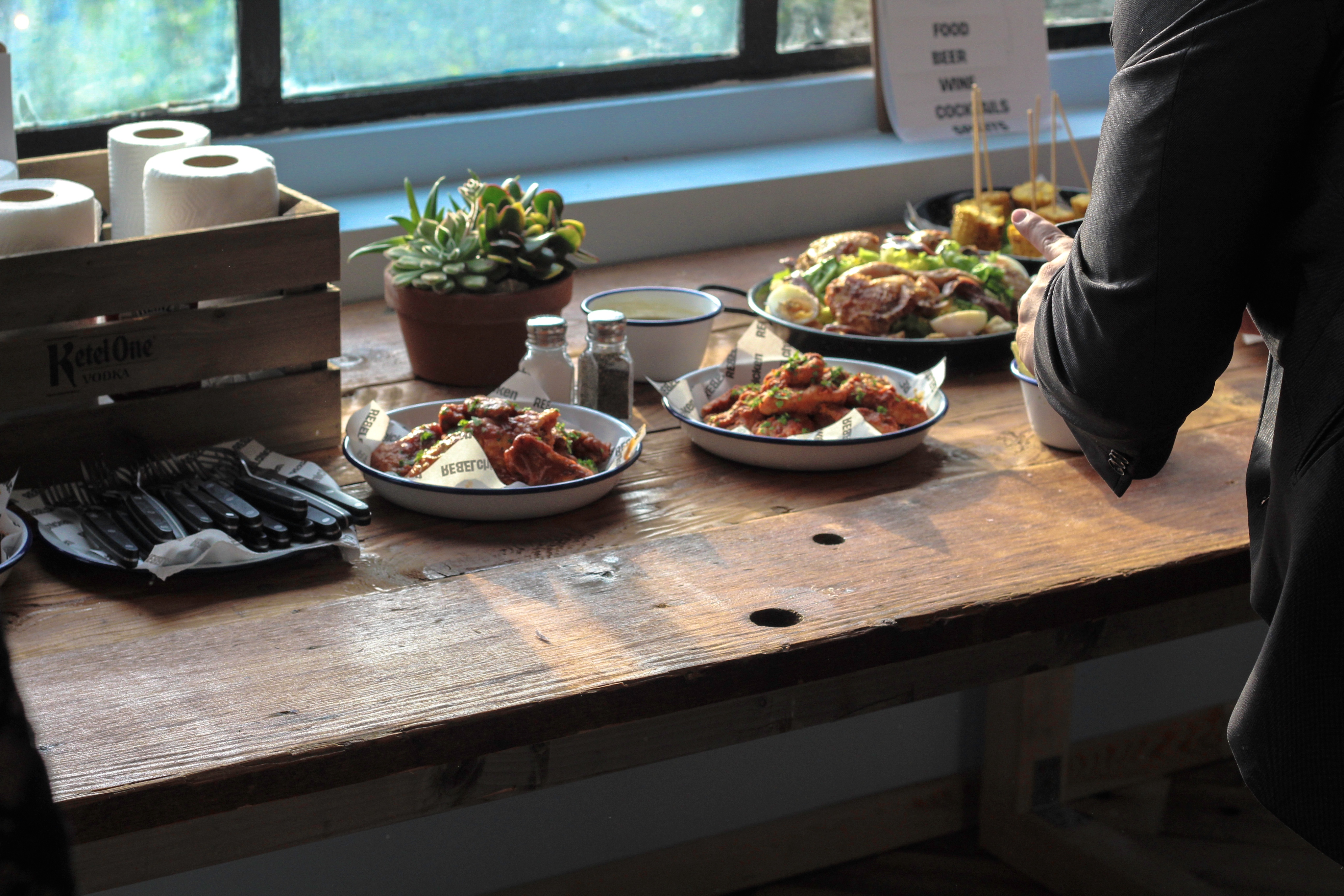 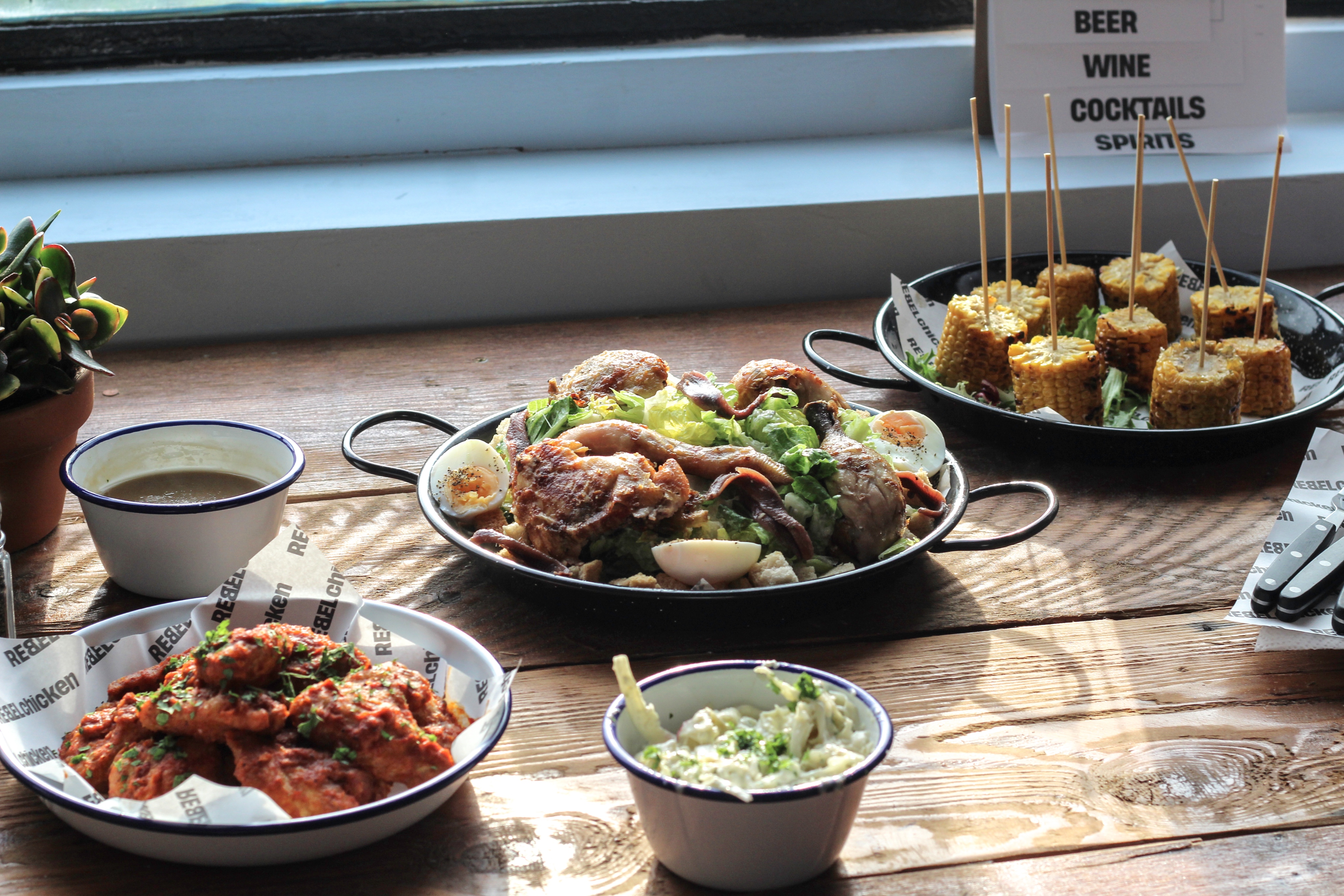 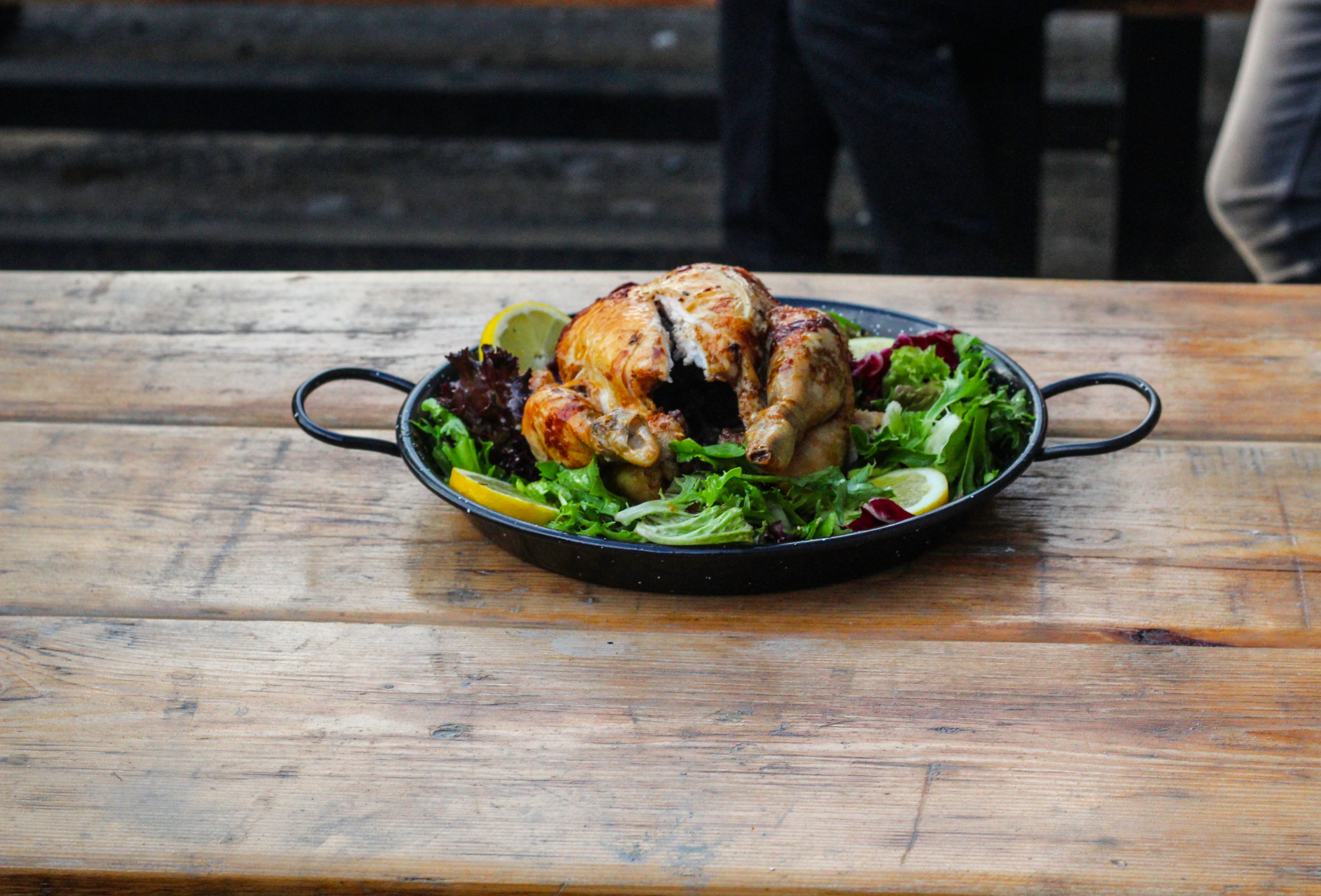 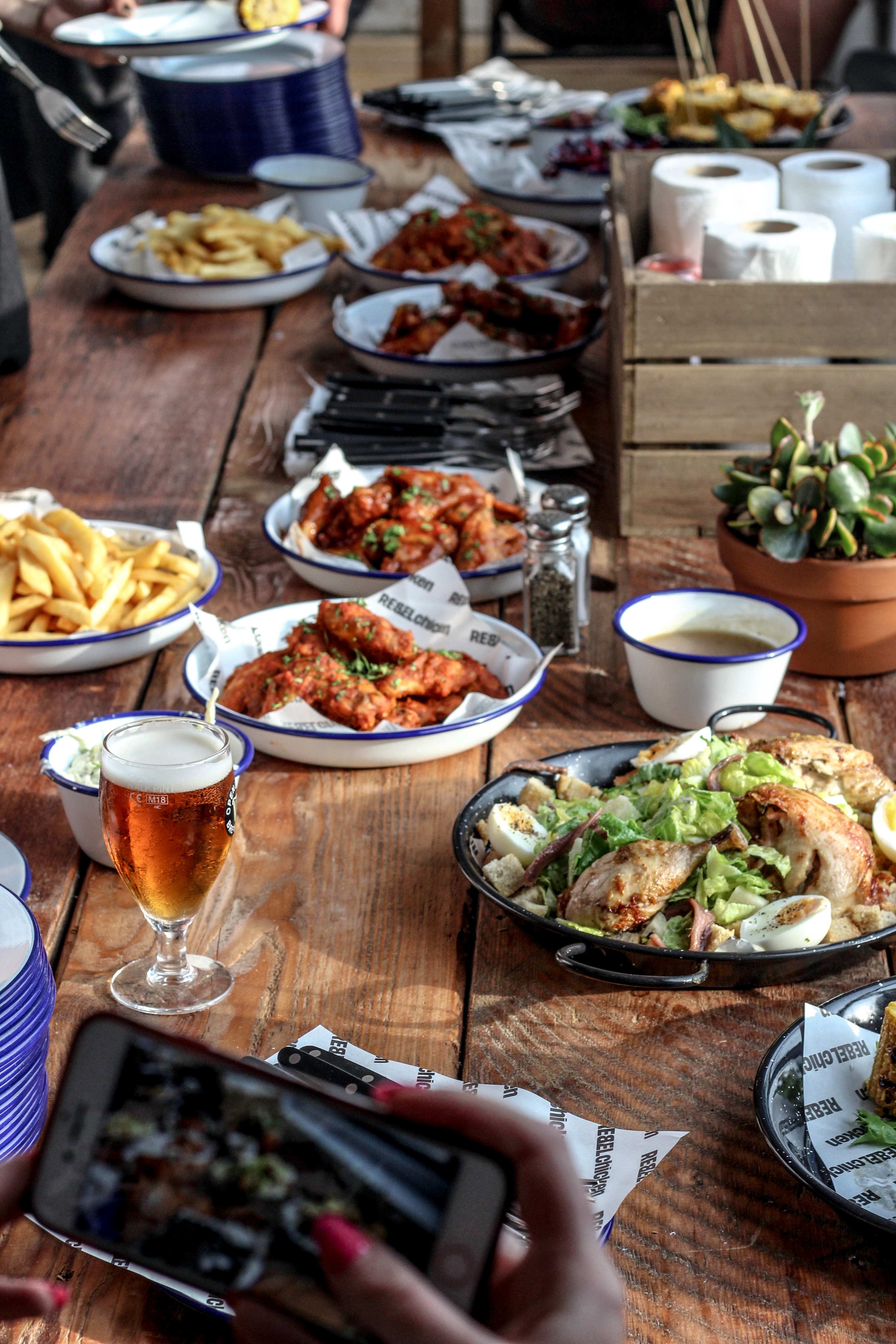 We cannot recommend The Rebel Chicken enough. You can only imagine how much effort has been put into making The Rebel a great experience. Every detail, small or large, has been worked out to make the chicken and all of the other delicious food they have to offer, the best it can be. We’re expecting big things in the future. 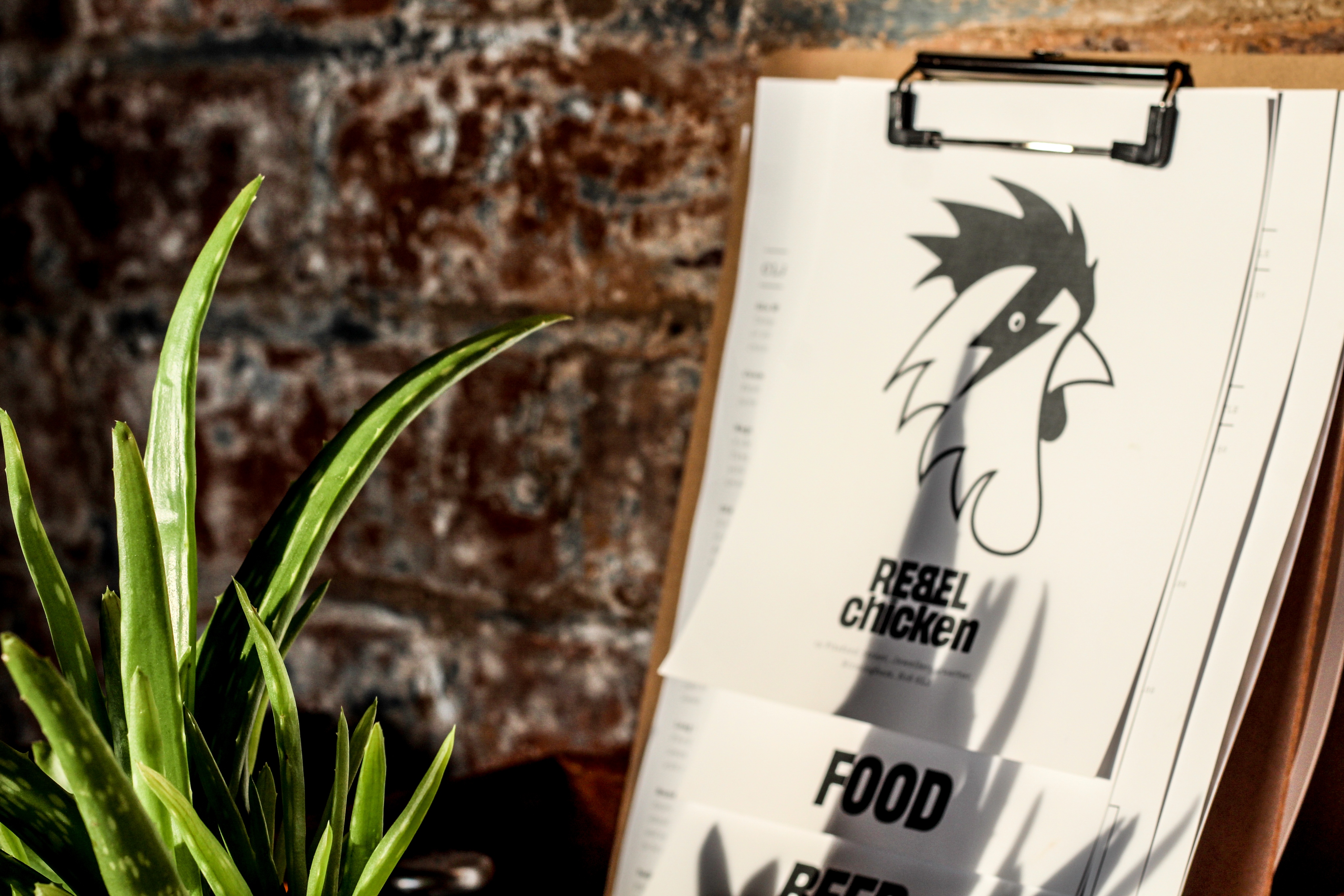